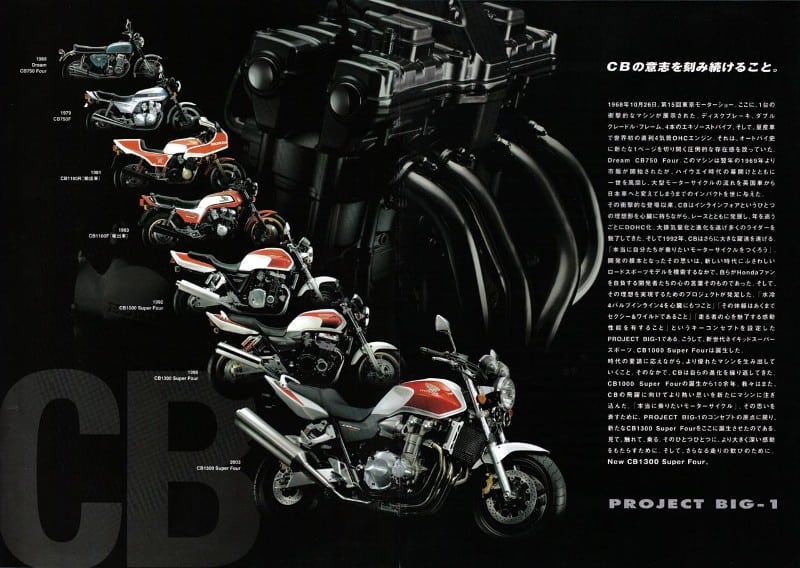 The History Of The Honda CB1300 and Honda X4

The CB900F was based on the CB750F platform and in race trim produced 130BHP at just over 10,000rpm. In the hands of nineteen-year-old Freddie Spencer, Honda gained its first win on June 1st, 1980 at the Road America circuit, in Elkhart Lake, Wisconsin. Spencer continued with surprise wins over two legs of the USA versus Great Britain Trans-Atlantic Match races, beating Barry Sheene and King Kenny Roberts, and he went on to finish 3rd in the AMA Superbike championship that year, behind the all-dominant Eddie Ray Lawson on the Kawasaki KZ1000R.

By 1982, the race kitted CB900F boasted 145bhp at 12,000rpm and was such an animal to contain that Spencer had straightened handlebars fitted to allow him to muscle the thing into bends. The CB900F won four nationals in 1982 at the hands of Spencer, Mike Baldwin, Steve Wise, and Roberto Pietri

Honda went a step further, by boring out the 901cc engine to create the CB1100R, produced by Honda as a pure race bike, to be used in the many worldwide street race series that existed at the time. Homologation rules required at least 500 examples of the race bikes to be produced as street-legal machines, and so Honda released 1050 CB1100RB (SC05) models in 1981, 1500 CB1100RC (SC08) models in 1982 and 1500 CB1100RD (SC08) models in 1983. The original RB model was styled similarly to the CB900F Bol D’or models, now featuring a 1062cc engine, and the first Honda to feature dual piston brakes. It came in a red, and white livery said to represent the flag of Japan. The following model had a dual seat and red, white and blue paint scheme. The final incarnation RD model shared many parts with the Honda CB1100F. 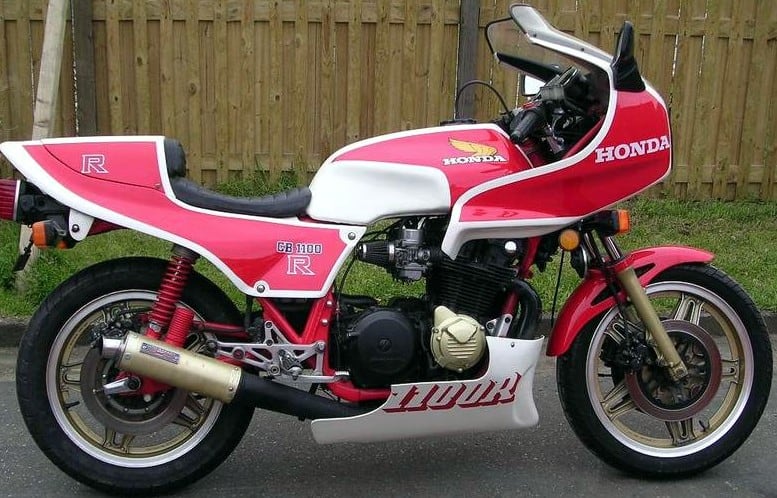 The CB1000 was hugely popular in Europe and Japan but failed to impact on the USA market. Indeed such was American apathy towards Hondas BigOne, that neither the subsequent Honda X-4, X-11 nor CB1300 would make it across the Pond. A special edition CB1000T2 appeared on the Japanese domestic market, resplendent in all black paintwork with an aggressive bikini fairing and bad boy looks. The CB1300 has often termed the spiritual successor to the CB1000 BIG-1 throne.

Mechanically, The CB1300 engine comes directly from one of Honda’s most successful domestic market motorcycles ever. First shown at the 32nd Tokyo Motor Show on October 15th, 1997, was the Honda X4.

The Honda X4 was a 1298cc motorcycle produced by Honda from 1997 until 2003, after which production was discontinued. The 1284cc 4 cylinder liquid cooled, inline DOHC engine, featured a bank of VEPB 36mm Carbs and was mated to a cruiser style chassis with a low 730mm seat height, 15-liter fuel tank and full wet weight of 270kgs. An eighteen-inch front wheel was mated to a seventeen inch rear, the rear a solid disc like the V-max, and large chrome exhausts.

This was Honda’s attempt to tackle the V.Max, the X-4 was sold primarily in Japan, but some bikes found their way to Europe, notably Germany, where they still enjoy a cult following.

In 2000, came a new version, the X4 LD (“Low Down”). Featuring a slightly lowered seat and frame, uprated suspension (with “piggyback”-style Showa rear shock absorbers), and a few cosmetic differences including an unpainted engine block and lightweight latticework inner rotors on the front brakes. In 2003, it was final year, the LD was offered in a special “black edition,” with few bikes being produced.

Also At the 32nd Tokyo Motor Show, Honda debuted what was planned to be the new flagship of their naked bike line up, simply called the CB1300 Super Four. Public praise was so strong, and demand so high for the model to be released, that a year later, on February 10th, 1998, Honda announced from Tokyo that the bike would commence sales from March 2nd. With a domestic sales target of 4500 units, the CB1300 Super four featured an engine derived directly from the best selling over 750cc class motorcycle of 1997, the Honda X4.

Tokyo, February 10, 1998—Honda Motor Co Ltd, has announced the launch of the new CB1300 Super Four motorcycle, which will go on sale on March 2. Designed to look like a stripped down superbike road racer, the CB1300 Super Four is large, yet handles superbly. Whether riding city streets, country roads or cruising the highway, the CB1300 Super Fours awesome power makes it a lot of fun to ride. Its huge liquid cooled 4 cylinders 1300cc engine provides more than enough power to place it at the top of its class

And what a class it entered into. In 1998 Kawasaki were in their second successful production year with the ZRX1100, a powerful brute based on the KZ1000R1&2 and KZ1100R1 Eddie Lawson Replicas, produced as a tribute to two times world AMA Superbike champ Lawson.

Yamaha had their own hugely capable air cooled XJR1200 which in just a year would evolve into the XJR1300; a 1251cc 139mph air cooled bike capable of a 12.2 standing quarter mile from its 105bhp engine. Yamaha also launched the better specced SP model in 1999 boasting speed block paint and Ohlins (unadjustable!) shock absorbers (remember, Yamaha, own Ohlins). Yamaha also had the grey import V-Max, strangled to 95.2bhp@8000rpm and quietened to 81db from the full power monsters in Japan. For the model year 1998, V-Max came with chrome exhaust system once more, replacing the previous year’s black system. Suzuki’s cheap and cheerful stunt monkey, GSX1200N & S Bandits featured a 1157cc air & oil colled engine that Moses himself rode, while Honda themselves had the popular CB1000 BIG 1 and BMW stalwarts had the timelessly styled R1100R.

The 1998 CB1300 Super Four (TYPE SC40), featured an SC38E 1284cc Liquid cooled 4-cycle, 4-Cylinder DOHC, 4 valves in line heart slightly altered from the cruiser X-4, with 17-inch wheels and a wider 130 front tire. Bore and stroke and compression rations remained exactly as the X-4, while double pro-link suspension graced the rear. A strong double cradle frame and twin piggy back shocks as per requirements of the naked breed were de rigeur. Rake and trail were 27 degrees and 113mm respectively.

Honda unveiled a wonderful home market limited edition in 1992, as a celebration of the 10th anniversary of the BIG1 PROJECT, a CB1300 resplendent in original CB1000 paint. This cost at the time, 1,060,000 Japanese Yen.

The torque the beast produces is almost truck-like.

In the May 2003 edition of Motorcycle Sport and leisure Tester Chris Moss goes onto say:

I make no secret of the fact that I enjoyed the Honda “ its best feature is its realism. In a world of congested roads flanked by countless speed cameras, it makes perfect sense. It has plenty of strong points, its fun and well mannered.I ts a real world bike built to perform best where it belongs â€“ on the road! â€œ

Announced in January 2003, The first changes to the CB1300 Super Four were shown at the 2003 Tokyo motor show , where, in the North Hall, Honda exibited two new CB1300 models.

The new street model went on sale on sale February 7th with Planned vehicle sales(domestic, annual): 4,000 units and prices at:

The exhaust was equipped with a variable exhaust valve. Other improvements included a drive chain fitted with plastic washers between the rollers to reduce drive noise and a rubber rear upper engine mount to reduce vibration noise.

The dual-backbone, double-cradle frame offered improved rigidity. A shorter wheelbase by 30mm, in addition to other modifications, resulting in a 7kg weight loss in the frame. A 12-liter storage under seat space, along with the six hooks located at the back of the seat, gace the bike a major increase in cargo capacity over previous models.

The CB1300 SUPER FOUR TYPE R model was a full on race bike. Exhibited as an ‘R’ reference machine, the Type R was a sensational machine made to allow Honda entry to the Suzuka International Racing Course. Suzuka is owned by Honda and was Designed as a Honda test track in 1962 by John Hugenholtz The Suzuka 8 hour endurance races began in 1978, and in 1982 Honda won with the CB900F ridden by Shigeo Lijima and Shinji Hagiwara on bike number 27.

Above is the road going HONDA CB1300RR, based on the race bike. How close we came to actually being able to buy this from the showrooms, can be judged by the July 20th 2004 release of the Japan domestic market only, HONDA CB1300 SUPER FOUR TYPE R.

Back down to earth, and for standard CB1300 owners, there was an official Honda factory recall reported on June 16th 2003, on recall notification number 957. The fault affected a total of 1,833 Super Four models produced between January 17th and June 2nd 2003 from engine number SC54-1000008-SC54-1002296. The fault was described as electrical apparatus (electric wiring) which could cause the engine to cut out completely or the brake light to fail. Problem rectification was marked by a sticker underneath the tail end.

BIRTH OF THE CB1300 SUPER BOL DOR THE SECOND UPDATE

The new 2005 CB1300 SUPER FOUR featured new side covers saving 10mm on each side to make the bike 20mm slimmer, so it is easier for the drivers feet to reach the ground. Engine ignition timing and PGM-FI settings were adjusted for improved low-speed throttle response. New patterns employed on the front and rear seat covers made it easier for the driver to move around, while providing superior grip and feel for the passenger.

The CB1300 SUPER BOL DOR featured a newly designed half cowl on a CB1300 SUPER FOUR base. The half cowl reduced wind pressure and improved ride stability during high-speed driving. It featured a rectangular multi-reflector headlight and tinted windscreen. Inside the cowl were two, one litre storage compartments, one lockable. The look was pure CB900F and more specifically CB1100F2 from 1981.

On the newly available ABS models, an ECU with self-diagnostic function receiving information from speed sensors mounted on the front and rear wheels, continuously monitored wheel lock. Honda’s electronic HISS immobiliser gave peace of mind, and underseat storage was maintained with space for a U lock. 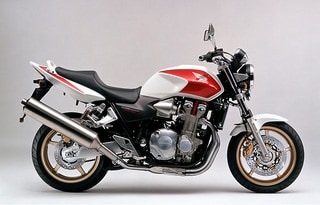 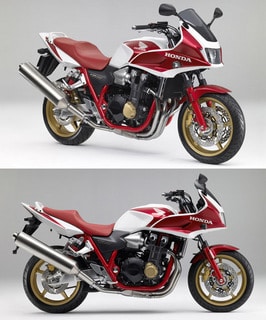 Limited to just 1000 models and costing 1,260,00 Japanese yen (Â£5,289), this model was styled to commemorate the original CB1100R from 1981. It featured a red seat and frame, gold engine cases and wheels and other touches in line with the original machine.

Honda have also released a new lowered seat for all CB1300 models which features a lowered height by 30mm in the riders seat section, and a 20mm lowered pillion height in the seat section. The riders seat section is also 15mm slimmer to allow shorter legs to reach the ground. The seat is available from the Honda accesories catalogue in Japan, product code OSK-ZX-MEJ12 and priced at 27,300 Yen